Treatment of firework and thunderstorm fears and phobias in dogs 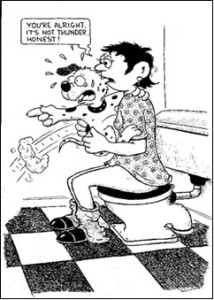 How is this problem treated?
Treatment for this problem is through systematic desensitization, counter-conditioning, and pheromone therapy.

When is the best time to start treatment?
This should be done at a time of year when fireworks or thunderstorms are not likely to occur so that you have control over the situation and time to work on your retraining program, without having to worry about how to deal with actual events.

How do I start this systematic desensitisation and counter-conditioning programme?
The dog is first trained to sit’ and relax’ on command with gentle reassuring tones. A good walk or exercise first will make relaxation easier. Remember to always reward the dog when the task is successfully accomplished. Initially food rewards may be used, but later soothing praise is the best reward. Once sitting and relaxation has been achieved the training should be tested in the face of some distraction. Some owners and handlers find that success can be achieved faster and more consistently throughout the program by using a restraint and control device such as a head halter. In practice, if you cannot get your pet to settle and relax in the absence of the fear evoking stimuli, and then with distractions, its not practical to begin your exposure exercises.

How do I organize the distraction?
Once you have your dog sitting and relaxed and this has been repeated several times, try simple distractions such as having another member of the family approach or even another pet, if available. Once you are confident that your dog will do a relaxed sit (or down stay or settle into its bed) on cue (command), then desensitization may begin.

How do I organize desensitization?
For fireworks either a variety of audio and video recordings of the noise or a cap gun can be used, whichever is capable of reproducing the fear response. Commercial CD’s are available that have been designed to reproduce these stimuli for desensitization training. It is important to start off with a noise at a volume that does not elicit any distress. The initial sound sometimes may be barely audible. For this reason it is probably better to have a CD or video of a firework display rather than using a cap gun. For gunshot fears and phobias however, a cap gun or starter’s pistol may ultimately be best since it also provides the visual cue of a gun. If a cap gun has to be used, this can be recorded at first and then played at minimal volume. Alternatively, the gun can be muffled using cardboard boxes and towels. Using a stereo surround-sound recording system is more likely to produce a sound that is most similar to the actual stimulus (fireworks). This same technique can also be used for thunderstorm phobias, using a video or audio recording of an actual storm. It is much harder to reproduce the actual event for retraining since the noise is not the only element of a thunderstorm and changes in barometric pressure, rain on the windows, darkening skies and flashes and bolts of lightening cannot be reproduced for retraining purposes and therefore not all dogs will respond to recordings and subsequent desensitization sessions. 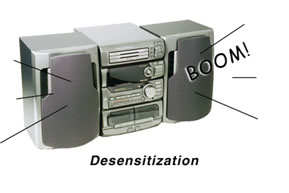 Put your dog on the relax’ command and then employ another member of the family or assistant to praise and reassure it for staying calm. If the correct response is not achieved, the behavior should be ignored and then go back several steps until you are sure that your assistant is able to achieve a sit’ and relax’ which is the first part of the program. Training your dog to relax in a specific area (e.g. go to your mat) may be a particularly useful command since the bedding area may further help the dog to relax and settle, and it may be a practical retreat to use for your dog during actual storms and can be moved to another location if needed such as when you are traveling.

Initiate the stimulus at the lowest volume possible. If there is a reaction the behavior should be ignored until your pet is settled after which it can again be given a treat. Then, once settled, try again to distract the dog at the same time with a much lower volume of the stimulus. Again the head halter might be a better way to gain control and insure that it focuses on the owner.

How does counter-conditioning work?
Although the training is primarily aimed at exposing the pet to gradually more intense levels of the stimuli while it remains relaxed, paring a favored reward with each training session can help the pet to develop a positive and enjoyable association with the stimulus. By identifying and saving the pet’s favored reward for each desensitization session, your dog should ultimately look forward to each new exposure to these muted levels of the stimulus (counter-conditioning). Reinforcer assessment (identifying your dog’s favored reinforcers) can help you to decide which rewards should be used for counter-conditioning program, with the less favored rewards used for other forms of training.

For how long do I repeat this part of the program?
It is important that you do not overdo it. After every few bangs give a special treat, play with the dog or initiate some particularly pleasurable activity. Make this the end of your first session. It is important you always end a session on a high note with a good response, even if that means turning the volume right down again.

When do I restart training?
This depends very much on the individual dog. It can be as short a time as an hour or as long as the next day. It is important, however, not to leave too long a gap between training sessions but the dog must be calm and settled before another session is begun.

What happens in the new session?
The new session is started with the same level of noise but this is soon increased slightly, bearing in mind that it is important not to go beyond the point when your dog may notice the sound and react. If this happens it is important to go back several steps and start with the noise at a much lower volume.

Keep repeating the process, increasing the volume only slightly each time.

What should I expect?
It is important not to expect too much, too soon. As a general rule you should not try to do more than three or four sessions in a block.

How long will this training program take?
You have to accept from the outset that the program will take days if not weeks or even months but eventually your dog should remain relaxed at full intensity noises. Once you have reached this point it is important to reinforce the good response on an occasional basis.

How often do I have to do this revision program?
Initially it has to be quite frequently but with time this can be less often. Reinforcements should be done shortly before the rainy or festive season. Do not expect your dog to remember everything until the next presentation of the stimulus.

What should I do if I don’t appear to be making any progress?
If you seem to be having any problems, consult your veterinarian for further advice or help. Sometimes sound sensitivity may be associated with both medical and more general psychological problems.

What happens if I haven’t managed to get my dog trained in time?
This is not an uncommon problem. Drugs and pheromones may be an option to help the dog improve more quickly or to help the dog better handle fireworks and thunderstorm events that arise before the program has been successfully completed.

Can drugs be helpful?
Drugs might be used in different scenarios. While the pet is being retrained and if there is any chance of exposure to actual stimuli, (e.g. thunderstorm season) it might be advisable to use an antidepressant to help your dog cope with its phobias and to help it better focus in its training. These drugs can take a month or more to achieve efficacy so should be started well in advance. Adding natural anxiolytic compounds such as melatonin or the pheromone DAP might also help. Prior to any expected exposure to the stimuli, an anxiolytic drug might also be used on an as needed basis.